New Awards at Hillis This Year

There were many changes at Hillis this year, from learning about the 7 habits, to new student leadership roles.  One of everyone’s favorite changes was the new Golden Awards!  Mr. Sean, Ms. Vicki, and Ms. Karla chose the winners of our golden awards each month!  Mr. Sean chose the class with the cleanest room to win the Golden Broom!  Ms. Vicki and Ms. Karla chose the class that best followed the cafeteria expectations to win the Golden Tray!  Students worked hard all year creating a leadership environment in their classrooms and around the school by keeping the spaces tidy and organized. 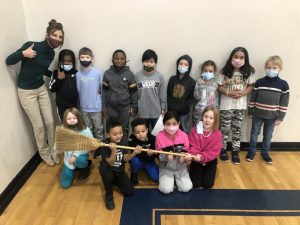