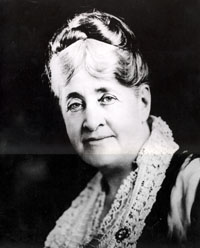 Cora Bussey Hillis was born in 1858 in Bloomfield, IA near the Missouri border. When she was 25 yrs old, she and her husband, Isaac Hillis, settled in Des Moines. Cora was a busy mother. She cared for five children and a younger sister. She went to Washington, D.C. for a mothers congress. The other women there wanted to help parents and teachers improve child-rearing. Cora invited the congress to Des Moines the next year.

Cora began thinking about the advice women received on child-rearing. She learned that a lot of it came from imagining and not from watching and studying real children. In fact, more was known about raising animals than raising children.

In the hot summer of 1912, Cora set up a camp for mothers with small children. She and other women cared for babies giving the mothers a needed break.

In 1917, Cora tried again to persuade the state to give money to study how children grew and developed. Some legislators still did not support Cora’s idea. But then World War I broke out and many young men from Iowa wanted to join the war. But many could not pass the physical exam required for military service. For example, in one day in Des Moines, 259 young men were examined and only 50 passed. Most of their problems were physical handicaps. Many of these handicaps could have been prevented had their parents know about simple healthcare. This helped Cora win her battle. The bill was passed.

Today, Cora B. Hillis is still remembered and, because of her work, early childhood education is considered an important part of life in Iowa. Cora Bussey Hillis didn’t know it at the time, but her determination to help children and parents in the early 1900s helped to set the stage for childcare in the 21st century.

The old wooden temporary building that was moved to the site in 1949 was called Tower School. It was so named because of its proximity of the water tower at 48th and Hickman.

1961 – Four room additions at east end of the building are completed.

1973- It became apparent that enrollment at Hillis was declining to a point that it would be possible to house all of the Riley students in the Hillis school building. A decision was made to close Riley at the end of the 1972-73 school year. Those students were given the option of attending several elementary schools but most chose the Hillis attendance center as their closest school.

1974-75 – In this school year a student council was begun, and as an activity the council adopted the “Hound” as the school mascot.

2007 – Hillis moves temporarily to Moore Elementary while the building undergoes renovation. Some highlights of the renovation include: new classrooms, a new library, and a new gym with a wooden floor, and new main entrance.

2008- Hillis reopens with a beautiful newly renovated building. Along with the highlights mentioned, it also has new, up-to-date technology, including projectors and document cameras in every room, wireless internet and a 30-unit mobile computer lab.